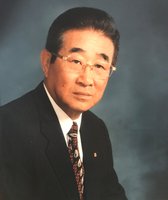 Chu Suh Chun of Cambridge, formerly of Palm Beach Gardens, Florida, passed away peacefully on Monday, February 24, 2020. He was 85 years old. Born in 1935 in Seoul, Korea, he attended Yonsei University in Seoul and Fenn College in Cleveland, Ohio, majoring in mechanical engineering. Having worked at several companies, Chu Suh became Founder and Chairman of what was to become International Industries, Inc. in 1968, along with several affiliate companies, retiring in 2004 after being recognized by several associations for his work in promoting manufacturing. Chu Suh served as President of the New England Korean Society, sat on the Board of Visitors at Clark University, and sat on the Board of Trustees at Cushing Academy. He was the beloved husband of Katy C. Chun, a devoted father to his daughters, Hannah (Mrs. Charles J. Welsh), Rosemary (Mrs. Anton B. Dodek), and Aileen, a proud grandfather to Allison J. Dodek, Michael J. Dodek (Morganne J. Gagne), and a happy father to his precious dog Coco. He also leaves his sister, Hesung Chun Koh, his brothers Chu Hyoung Chun and Chu Il Chun, and many cherished nieces and nephews. Private services were held for him in Cambridge and he is interred at Mount Auburn Cemetery. He is missed by those who knew and dearly loved him.