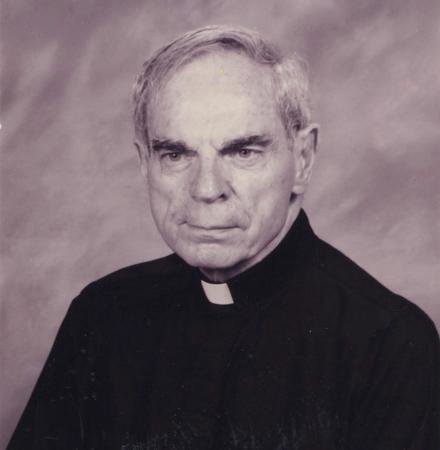 A Newton native, he was son of the late Patrick and Alice (McCarthy) King. Born on March 26, 1925, he was raised in Our Lady Help of Christians Parish and attended both the parish elementary and high school prior to entering St. John Seminary. His father was a member of the police department in his hometown.

After college and theology studies in Brighton, he was ordained to the priesthood at Holy Cross Cathedral by Archbishop Richard J. Cushing on May 4, 1949. Of the class of 1949, only Msgr. Francis McGann survives and is living at Regina Cleri.

Following ordination, he served for two years at Immaculate Conception Parish in Revere, until he was appointed to the faculty of Cardinal O'Connell Seminary in Jamaica Plain in 1951. According to seminarians at the time, he was task master about Latin and French and especially about observing "The Rule."

In the fall of 1953, he was sent for initial graduate studies in biblical theology at The Catholic University of America in the nation's capital. Between 1953 and 1957 he was assigned to graduate studies both in Washington and later in Rome. In 1954 he received an STL at CUA; in 1957 he earned an SSL (licentiate in Sacred Scripture) at Rome's Pontifical Biblical Institute and the doctorate in theology at Rome's Lateran University in 1959.

In the summers of these years, he served in residence in several archdiocesan parishes: Mary Immaculate of Lourdes, Newton; and St. Augustine and St. Christopher, both in Boston.

In September 1958, he was appointed to the faculty of St. John Seminary, Brighton, with Old Testament as his field. He was the beneficiary, and so were his students, of the blossoming field of biblical studies encouraged by Pope Pius XII and then later by the Second Vatican Council.

His friend, the late Father James O'Donohoe, told more than a few stories about Phil, but an especially rich one was when both returned from respective studies: King from Old Testament and O'D from Canon Law, each went to meet with Archbishop Cushing to explain his studies, etc.

Phil went first and chatted away with the archbishop and dropped the gem that he had studied "Egyptology" among other things. The archbishop gave him his faculty appointment and in comes O'D. He tells the archbishop he had studied Canon Law; without missing a beat, according to O'D' at least, in his raspy, gravelly voice Cushing said "Thanks be to God you studied something we can use in the archdiocese. That fellow (King) who was just here studied Egyptology ... and we don't have a single Egyptian in the whole archdiocese."

During the next 16 years at St. John, he instilled a love of the Old Testaments in hundreds of seminarians. He was obviously in love with his subject and wanted his students to be as well. He was especially in love with the Psalms and anyone who had him teach Psalms came away from his course completely refocused on them on new ways.

Another corpus he loved was that of the prophets; peppered among his publications are commentaries and articles on Amos, Hosea and Micah. He told seminarians that the job of a prophet was "to comfort the afflicted, and to afflict the comfortable" -- and that would be an aspect of priestly ministry.

Already in these years he was expanding his biblical reach and interest and his membership and leadership in both Catholic and ecumenical biblical associations was impressive: he was a member or officer or both of Catholic Biblical Association; Society of Biblical Literature; W.F. Albright Institute of Archeological Research; American School of Oriental Research; among others.

His curriculum vitae in 1997 just prior to his retirement ran to seven pages of memberships and publications.

In 1974, he travelled across Commonwealth Avenue and for the next quarter century dazzled both graduate and undergraduate students in his various classes at Boston College -- all Old Testament. As much as a task master as he had been at Cardinal O'Connell, he was much more relaxed and personable with his BC students.

Between 1974 and 1999, while on lend lease to Boston College he also served in three parishes: St. Timothy, Norwood (with his classmate friend the late Bishop Joseph Ruocco); St. Mary of the Annunciation, Cambridge (closer to Harvard where he had developed many relationships academic and personal) and St. Cecilia, Boston.

During his later seminary faculty years and Boston College years, he led many "digs" to archeological sites across the Middle East, Egypt, Israel and Jordan being regular destinations. Obviously, he could entertain for hours with tales from the "Digs" not just technically but also about the friends he had made among the local populations and the characters he encountered on the treks.

Following his retirement from academe in 1999, he lived in his own residence; then at Youville House, Cambridge and finally at Regina Cleri, Boston. He had a few health issues, but nothing that limited his activity and teaching, even in retirement. It was not until he moved his residence to Regina Cleri that he really slowed down.

His physical stamina continued to decline, but his mind was still alert and he much appreciated visits from his cadre of appreciative former students. Even until a few days before his death, visitors were coming and going to his room at Regina Cleri.

During 70 years of priestly ministry, Father Philip King inspired generations of students to love the scriptures. He advised to "read the Old Testament as the writers intended it to be read" ... or as he more succinctly put it ... "Read it as a good Jew would read it."

He urged his priest students to base their preaching on solid biblical study and constant updating of their own biblical knowledge.

As one of those students said "Now he can speak Hebrew with Jesus."

Share Your Memory of
Rev. Philip
Upload Your Memory View All Memories
Be the first to upload a memory!