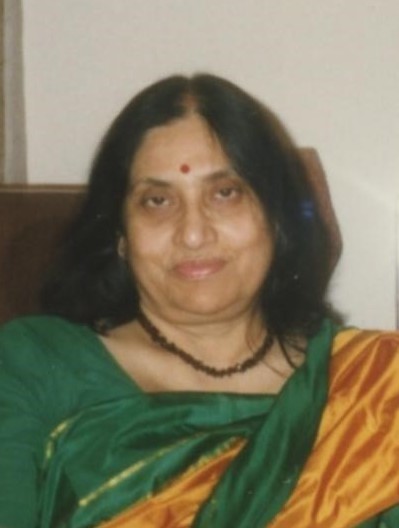 Krishna Chatterjee, beloved mother and wife, passed away July 4, 2020, in Cambridge, Massachusetts, at the age of 77 after bravely battling cancer.  She lived most of her adulthood in the US, most recently sharing her time with her daughters and their families in Cambridge and Austin, Texas.

Krishna was born in Dinajpur, India, and lived her childhood and early adulthood in Banaras, India, where she grew up and earned master’s degrees in Ancient Indian History and Culture and in Education at Banaras Hindu University (BHU).  Her career was as an educator.  She taught as a Lecturer at a Girls College affiliated with BHU, where she excelled and later became an expert that worked with other colleges traveling throughout the state of Uttar Pradesh.  She enjoyed her career and friends but decided eventually to marry Ramendra Nath Chatterjee and immigrate to the US in the early 1970s.  Her brother recounts that she made it clear she would either pursue a career or marriage but not both, which he thought was a surprise. Her oldest daughter, Sharmila, remembers her saying as they grew up that it is hard to have it all, so do what you can well. Krishna definitely did her best, raising two daughters, supporting her husband’s career, and making a life for herself in a new country where she easily befriended many wherever she lived.  She gracefully managed a family as they built their own story of the American dream. She is widely known both by her family and friends as unassuming, funny, practical, frank and a great cook.  Her brother recalls she never complained, taking life in stride and, even in the final stages of her battle with cancer, she was in good spirits, as her daughters and many of her friends remember.

She is survived by her younger brother, Mr. D. Sanyal and his wife; her daughters, Pia Chatterjee and Sharmila (Mona) Chatterjee Kassam, and her four precious grandchildren:  Riki Nath Szyld, Lila Szyld, Shaan Chatterjee Kassam and Samir Kassam. Her youngest daughter, Pia, recalls that her life focused on her grandchildren, whom she adored and loved dearly. She also leaves behind dear family and friends in London; Banaras, India; and in all the cities she lived in across the US.

The funeral was held Tuesday, July 7, 2020, at John C. Burns & Sons Funeral Home in Cambridge, Massachusetts with her ashes being spread off of the coast near Quincy, Massachusetts near a lighthouse and in the same waters as her husband.  Krishna, like a lighthouse, taught her daughters and helped her friends find the way forward and navigate their way through good and bad times.  She will live on in the memories they have of her.

The family asks donations to be sent in honor and memory of Mrs. Krishna Chatterjee to CHA Foundation (https://www.challiance.org/) in lieu of flowers for their exceptional care of her when she was fighting cancer.

Share Your Memory of
Krishna
Upload Your Memory View All Memories
Be the first to upload a memory!
Share A Memory