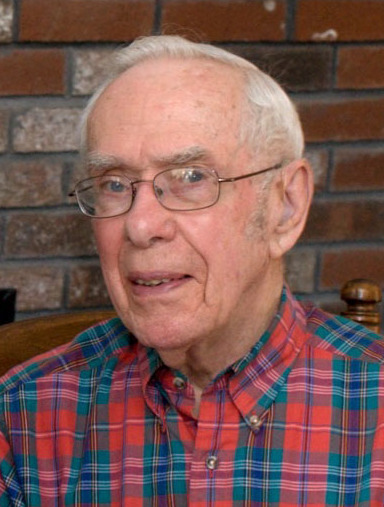 Douglas Harold Smith of Tewksbury, formerly of Wakefield, died Friday, August 21, 2020 at the Blair House in Tewksbury at the age of 97.

Born in Everett MA on January 10, 1923, he was the son of the late Harold and Isabella Smith.

He is predeceased by his wife of 69 years Lucy M. Smith in January of this year.

Doug grew up in Everett. He graduated from high school there and went on to attend college before proudly serving in the United States Air Force during WWII. He was proud to have served in the Air Force back when it was known as the Army Air Corp.

Upon his honorable discharge from the Air Force, he gained employment as a technical writer for General Electric. He worked for G.E. first in Everett then later in Lynn where he retired.

Doug built a home in Wakefield where he lived with his wife Lucy for most of their married life. He enjoyed boating. He could be seen walking around Wakefield for many years enjoying conversations with many people he met along his walks.

He was a former member and past master of the Mount Vernon - Galilean Masonic Lodge A. F. & A. M.

He recently became a great-grandfather to Amelia.

Services will be private. Guestbook available at www.burnsfuneralhomes.com

Share Your Memory of
Douglas
Upload Your Memory View All Memories
Be the first to upload a memory!
Share A Memory