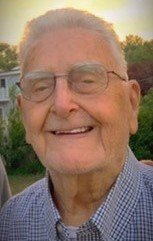 James D. “Jim” Twombly, 85, of Tewksbury, passed away unexpectedly Saturday, September 26, 2020. He was the husband of Martha F Twombly and together they happily celebrated 63 years of marriage on May 5th. Born October 27, 1934, in Boston, he was the son of the late Clinton A. and Delphine A. Twombly. He was the sixth of eight children and grew up in Billerica, where he attended the Howe High School and graduated with the class of 1953. Jim proudly served in the United States Navy from 1954 to 1958. He enjoyed volunteering as a coach for many years in the Cambridge Youth baseball League. He was also an avid freshwater fisherman. Jim Worked as a Supervisor for Ames Safety Envelope in Somerville MA. He worshiped daily at Saint Williams Catholic Church in Tewksbury. Jim enjoyed a long retirement spending every minute he could being involved in the lives of his family especially his grandchildren and great-grandchildren. In addition to his beloved wife, Martha, he is survived by his sons Gary Twombly of Dracut and Brian Twombly of Tewksbury; his brother Thomas Twombly of Wilmington and sister Mary McLaughlin of California. He was the loving grandfather to four grandchildren, Lauren Skarbo of Hull, Courtney Meaney of Billerica, and Kevin and Matthew Twombly of Billerica. He was the great-grandfather of Jet, Jack, Alison and Hailey. He is predeceased by his son, James E. Twombly. A celebration of his life will be held at a later date. www.burnsfuneralhomes.com

Share Your Memory of
James
Upload Your Memory View All Memories
Be the first to upload a memory!
Share A Memory