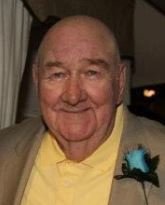 Richard requested that donations be made in his memory to:  Care Dimensions, 75 Sylvan St, Suite B-102, Danvers, MA 01923 or via their online option www.CareDimensions.org.

Dad/Papa/Dick/Dickie/Obie was a family man through and through.  Born December 17,1933, the son of Ethel and James O’Brien.  He grew up in Arlington and after high school, entered the US Marines.  He was a proud yet humble Marine who loved his country.  After the marines he met his true and forever love, Beverly (McCormack) and was married to her for over 60 years.  He was a career firefighter in his hometown of Arlington retiring in 1998.  As a provider, Dick worked two jobs to support his 5 children and bride.

Dickie was an avid outdoorsman.  Enjoying both fishing and hunting into his later years.  One of his best hunting stories went something like this.  That buck head on the wall has a story.  He tells this one from the perspective of a long time friend and fellow firefighter, Joe O’Brien (not blood related).  “So Joe says, how the heck did you bag that deer Obie?  You did everything wrong.  You’re eating Snickers bars and dropping the wrappings, you’re peeing in the snow, and lastly you’re smoking butts, lots of em”.  Dick responds with “and so I says I looked down from my seat on that wall and the buck is walking towards me on the path.”  “So I shakes the sleep from my eyes and took him down.” The rest is history.

Richard (Dickie/Dick) O’Brien of Billerica, MA and formerly of Medford and Arlington:  He was also known as “Obie” passed away peacefully on Saturday February 20th after a brief but courageous battle with cancer.  He leaves behind his wife of 61 years, Beverly O’Brien.  Also survived by his 5 children:  Michael and his wife Carmen of Lehigh Acres, Florida, Thomas and his wife Carolyn of Medford, Maureen Sampson and her husband Mark of Billerica, , Timothy and his wife Cherylanne of Winchester, and Daniel O’Brien of Woburn.  He is also survived by many grandchildren: Bianca [O’Brien] and her husband Paul Abrams of Westlake FL, Ashley and Timmy O’Brien of Winchester, MA, Chelsea and TJ O’Brien of Medford, MA, Meghan and Caitlin Sampson of Billerica, MA, and Brendan and Dylan O’Brien of Andover, MA.

Richard requested that donations be made in his memory to:  Care Dimensions, 75 Sylvan St, Suite B-102, Danvers, MA 01923 or via their online option www.CareDimensions.org.

All services are immediate family only.https://www.caredimensions.org/